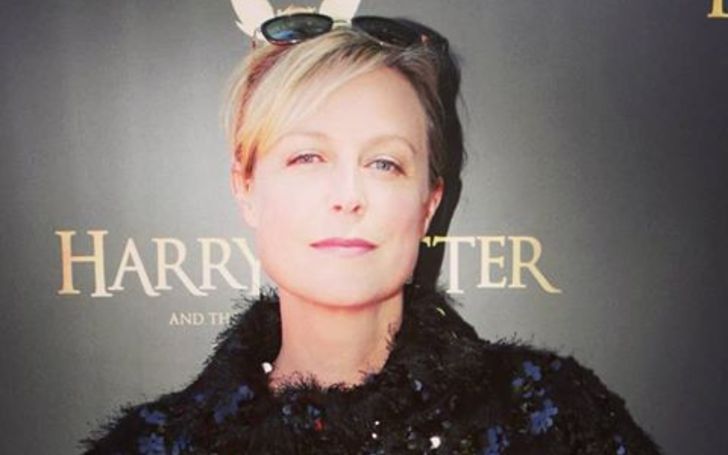 Helpmann Award-winning actress Marta Dusseldrop is an Australian film, theatre and stage actress. She is widely popular for her work in the TV series Crownies, BlackJack, and A Place to Call Home. Likewise, she is also an ambassador for Australia for UNHCR and Save the Children Australia.

Dusseldrop was born on 30th November 1972 in Australia with the birth sign Sagittarius. Likewise, she holds Australian nationality and belongs to white ethnicity. She also has Dutch ancestry.

She is the granddaughter of Dick Dusseldrop who is the founder of Lend Lease Corporation. Mart grew up alongside her twin Destroy. Besides, information regarding her parents is not known.

For her education, she went to Geelong Grammar School graduating in 1990. Later she enrolled in the University of New South Wales majoring in theatre and film. Similarly, she even attended the Victorian College of the Arts located in Melbourne.

Marta Dusseldorp’s Relationship History: Who is she married to?

Moving on to her personal life, Marta is a married woman and mother of two. She is married to her love Benjamin Winspear aka Ben. He is an actor best known for his work in films like My Place, The Babadook, and Panic at Rock Island.

The couple is blessed with two daughters: Maggie Winspear and Grace Winspear. Although the exact marriage date is not disclosed, they have been married for a long time.

The couple resides in Brisbane and lives a blissful life with family. The duo often spends quality time with their children and goes on vacations.

Besides, Dusseldorp is not involved in any kind of extra affairs, and controversies. Also, there are no rumors about their divorce.

Marta Dusseldorp’s Net Worth and Salary

Talking about her worth, Marta has a net worth of $1 million at present. Her primary source of income is her career in acting. Besides, she even earns a nice sum of money from her sponsorships, advertisements, and endorsements deals. As of her husband, Ben has a net worth of $12 million as of now.

She initially started acting at a young age and has appeared in several tv series and films. In 2011, she portrayed the character of Janet king in the ABC1 drama series Cronwnies.

As a stage artist, she played the role of Queen Margaret in Benedict Andrew’s The War of the Roses in the Sydney Theatre Company. Her role won her the 2009 Helpmann Awards in the best category for Best Female Actor in a Supporting Role in a Play.

Likewise, she played the role of Gloria with the Griffin Theatre Company in 2016. In 2017, Marta and her husband played the couple in Joanna Murray-Smith’s stage adaptation of Scenes from a Marriage in the Queensland Theatre Company.