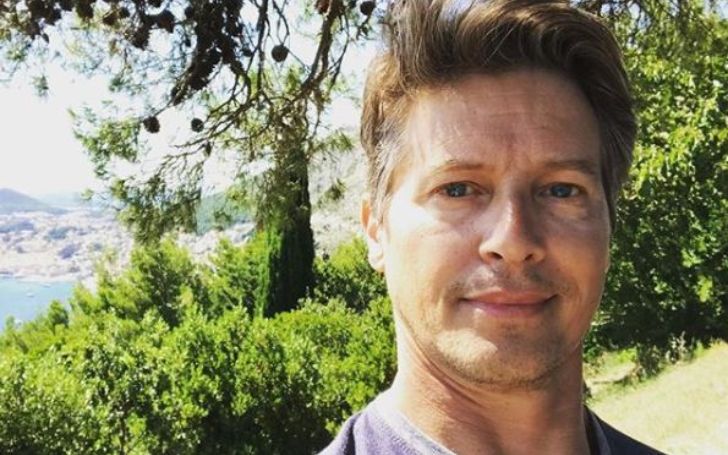 Scott Gill is openly gay who is married to Scottish-American actor John Barrowman. The marriage between them, have inspired millions of people of the LGBTQ community. They were the first gay couple to get married after same-sex marriage became legal in California.

Scott Gill was born under the birth sign Aries on 2nd April 1963 as Sheridan Robert Gill in England. He has an English nationality and belongs to the white ethical community. As of 2018, he has reached 55 years.

Although there is no information about her parents it is known to us that he is very close with husband’s family members.

The British man, Scott Gill and John Barrowman have an adorable love story, which leads back to 1991 when he first met his eyes with his partner at the Chichester Festival Theater. After the meetings, the couple started dating.

After cocktails with @stephenamell @cassandrapants it’s our #anniversary everyone. Nite nite. JB

Scott and John dated for 15 years and then got into a civil partnership in the UK in 2006. After same-sex marriage was made legal in the USA, the couple tied the knot on 2 July 2013. They were together for 27 years and has been into a married relationship for the last five years.

The couple frequently uploads their pictures on social media, which proves their bond on love and trust. As for now, both of them are in their 50′ and has no any kids. The couple has also not thought about adopting children and starting a family.

Gill is an architect as well as a licensed pilot, by profession, who has largely avoided the media spotlight. In the year 2008, he appeared the Barrowman episode of The Making of Me.

From the money he has earned, he is living a luxurious life, with his husband just like the businessman Chris Potoski. He has bought a considerable amount of fortune in his life, from his career.

As an architect, he has an annual salary of $76K whereas $121K as a Pilot. Though he is not as popular as his husband John, Gill enjoys the fortune of his husband, who has an estimated net worth of $4 million.